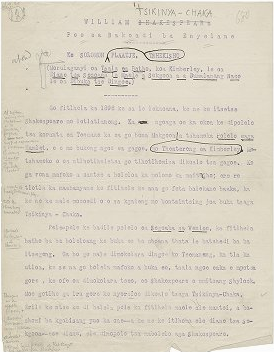 Shakespeare’s Anniversary coincided with the Easter Rising, which inspired W. B. Yeats’s poem and its brief allusion to Hamlet in the line “That is heaven’s part”.

Douglas Hyde, leader of the Gaelic League, contributed a poem of twenty-seven stanzas in Gaelic, with English translation, to Israel Gollancz’s volume of homage and was urged to make changes in the English version to passages that might offend English ears. His English apostrophy to deceitful vindictive Albion was deleted, but the Gaelic text remained intact.