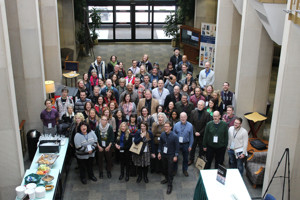 Shakespeare Theatre Association Member Theatre, Shakespeare at Notre Dame is in the midst of hosting two international conferences on campus as part of their “Shakespeare: 1616-2016” celebration. First up is the second iteration of 2013’s Shakespeare in Prisons Conference, titled, “Shakespeare in Prisons: In Practice.” SIP:IP brings community and prison arts practitioners from around the world to Notre Dame January 25-27 for three days of plenaries, panel discussions, and active workshop training by some of the most noted figures in the field of Shakespeare and social justice (including Curt Tofteland, Shakespeare Behind Bars; Tom Magill, Educational Shakespeare Company; Sabra Williams, The Actors’ Gang Prison Project; Michelle Hensley, Ten Thousand Things; Bill Watson and Nancy Smith-Watson, Feast of Crispian; and Meade Palidofsky, Storycatchers Theatre). Participants will be given an opportunity to explore techniques for approaching incarcerated and nontraditional populations.

In an effort to build on this foundation of Shakespeare as a catalyst for positive social change, the close of “Shakespeare in Prisons: In Practice” will also serve as the opening for the 26th annual conference of the Shakespeare Theatre Association (STA). Attended by more than 160 artistic, managing, and education directors from theatre companies across the globe, the annual STA conference serves to foster a spirit of collaboration and innovation in the collective approach to the production of Shakespeare’s plays for modern audiences. Plenaries, panel discussions, breakout sessions, and special performances will seek to broaden the conversation about what Shakespeare means in contemporary society, 400 years after his passing. Featured speakers include Nicholas Hytner, former artistic director of Great Britain’s National Theatre of Great Britain; Bill Rauch, artistic director of the Oregon Shakespeare Festival; Michael Witmore, director of the Folger Shakespeare Library; Paul Smith, director of the British Council USA; and Antoni Cimolino, artistic director of the Stratford Festival.